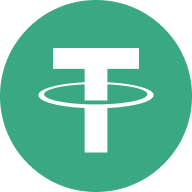 Tether (USDT) is the world's first and most widely used stablecoin and the third-largest cryptocurrency by market capitalization. USDT is an Ethereum-based, asset-backed, stablecoin primarily pegged and backed to the U.S. dollar. Hence, Tether's value remains consistently close to 1 USD.

Initially called Realcoin, Tether was launched in 2014 by Reeve Collins, Craig Sellars, and Brock Pierce. USDT tokens are issued by Tether Limited, a company controlled by Bitfinex, and can be redeemed at any time for an equivalent amount.

Tether was initially built on top of the Bitcoin blockchain, but its network has now been expanded to run on over ten different blockchain protocols, including Ethereum (ETH), Tron (TRX), and Solana (SOL).

USDT, being a cryptocurrency, can be minted or destroyed by its issuing company Tether Limited, and more importantly, be quickly and cheaply transferred to individuals over any supporting blockchain network.

For example, whenever new USDT tokens are issued, Tether allocates the corresponding USD amount to its reserves, thus ensuring that USDT remains fully backed by cash and cash equivalents.

USDT has proven to be a stable currency. Compared to regular fiat currencies, Tether converts fiat U.S. dollars into stablecoins and expedites transactions to other cryptocurrencies.

Additionally, USDT has become a popular trading pair across major exchanges due to its ease of use and wide acceptance. It is also convenient for users to move their USD holdings between their Web3 wallets and exchanges.

Tether can also be used to gain some level of exposure to the U.S. dollar by individuals who may not have access to actual U.S. dollars. Tether Limited publishes a daily report on the value of its reserves and has quarterly assurance opinions issued by independent accountants.

In January 2021, Tether limited minted a record 2 billion USDT tokens in a single week. This came at a time of tremendous growth in the crypto markets, shortly after a previous record of 1.5 billion tokens was set. The growing interest in USDT was pegged to several reasons, including an increasing lack of trust in traditional financial institutions and currencies and rising institutional interest in cryptocurrencies.

In November 2021, USDT launched on the Avalanche platform. Avalanche, launched in 2020, is one of the blockchain industry's fastest and cheapest-to-use smart contracts platforms. The Avalanche-native USDT was first supported by Bitfinex and was said to offer cheaper and quicker USDT transactions.

In April 2022, USDT support was added for the blockchain network Kusama making Kusama the tenth network to support the asset-backed stablecoin. This represented a milestone for Kusama and an especially significant one for USDT.

Kusama is a decentralized network of specialized, parallel blockchains closely related to the much more extensive Polkadot network and is often referred to as Polkadot's Canary network. Polkadot itself is set to join the list of blockchains that support USDT.

In May 2022, USDT was launched on the Polygon network. Polygon is an Ethereum scaling solution, also known as a sidechain or layer-2 network, that is known for charging significantly lower transaction fees and being faster than its main network, Ethereum.

At the time, Polygon had processed over $1.6 billion in transactions, had over $5 billion in locked value, and had more than 19,000 decentralized apps (DApps) running on it. Polygon is the 11th blockchain network that USDT was launched on.

Tether Limited Inc. accepts deposits from investors and stores them in its reserve, minting new USDT tokens of equivalent value and issuing them to the depositors in return. Whenever a USDT holder redeems their tokens for U.S. Dollars, the tokens are destroyed. Tether Limited controls the minting and burning of USDT tokens.

USDT has no supply cap, so any number of USDT tokens can be created by Tether Limited, given that there is sufficient collateral to back them. Ordinarily, minting new tokens does not erode the value of existing tokens. Likewise, burning USDT tokens does not increase token value.

Tether was founded in 2014 by a group of early crypto adopters and Bitcoin enthusiasts who were highly passionate about digitizing fiat currencies. Its origins lie in the Mastercoin protocol, based on the Bitcoin blockchain.

Brock Pierce was one of the original members of the Mastercoin Foundation that helped develop and promote Mastercoin. Pierce, along with Craig Sellars and Reeve Collins, co-founded Tether in 2014, with Mastercoin protocol as its technological foundation.

Tether's precursor, "Realcoin," was announced in July 2014, and the first tokens were issued in October 2014. The project was renamed Tether later in November of that year, alongside an announcement of entering the private beta phase, with three currencies: USTether (for USD), EuroTether (for EUR), and YenTether (for JPY).

Block Pierce is a widely known entrepreneur and co-founder of multiple high-profile entertainment and crypto projects, including Blockchain Capital and Block.one, the company that created the EOS blockchain. He also served as Director of a nonprofit organization created to improve and promote Bitcoin called Bitcoin Foundation.

Reeve Collins is also a serial entrepreneur who, at the time of co-founding Tether, had already co-founded successful companies like Traffic Marketplace, RedLever, and Pala Interactive. On the other hand, Craig Sellars has been an active member of the Omni Foundation and has also been associated with multiple organizations, including Bitfinex, Synereo, MaidSafe Foundation, and Factom.

What is a stablecoin?
Stablecoins are cryptocurrencies designed to have a fixed price either by having their value pegged to some cryptocurrency, commodity, fiat currency, or financial instrument or by utilizing an arbitrage system.
Will the price of USDT increase?

Being a stablecoin, Tether's price is designed to be fixed at $1 and is, thus, not likely to either see any significant increase or decrease.

However, USDT's price has fallen below $1 a few times. This usually occurs during high levels of uncertainty and fear in the markets. But, USDT has managed to regain momentum.

Additionally, USDT's price is unlikely to stray far from $1 because as long there is positive market sentiment, the tokens can be redeemed for an equivalent amount of U.S. dollars.

Is USDT a good investment?

Furthermore, like all cryptocurrencies, USDT is volatile and carries investment risks. Therefore, before investing, you should do your own research (DYOR) and evaluate your risk appetite before proceeding.

Where can I buy USDT tokens?

Before you begin trading with OKX, you need to create an account. To buy USDT with your preferred fiat, click "Buy with card" under "Buy Crypto" on the top navigation bar. To trade BTC/USDT or ETH/USDT, click "Basic Trading" under "Trade." Under the same tab, click "Convert" to convert crypto to USDT.

Alternatively, visit our new OKX Crypto Calculator. Select USDT and the desired fiat that you would like to convert to view the estimated live conversion price.